PROFILE OF THE DEPARTMENT

The Department of Physics was established in the year 1965, the department has been instrumental in developing pupils mindset into various streams viz., science, arts, sports, and politics. It had also created pavements for several young minds to acquire entrepreneurship. The department expanded its territory from basic level of physics to advanced sciences in 2012 under the able guidance of Prof. A. H. Rama Rao, President, the N.E.S. of Karnataka, who himself a physicist with a doctoral degree from Indian Institute of Science, Bangalore. The P.G. department was started on 26th September, 2012. The department has been growing rapidly with the excellent reputation of National College and currently Bangalore University has conferred Research Centre for the department. Very committed students are joining the department in large numbers. The department was headed by Prof. Pundareeka Bhatta since inception and it was taken over by eminent scientist Prof. B. S. Seshadri in 2013, earlier a scientist at BARC and IGCAR, Kalpakkam and also retired as Science Dean at Kuvempu University, Currently the Department of P.G. Studies & Research in Physics is headed by Dr. Pramod N G  The Department of Post Graduate Studies and Research in Physics consists of very young, talented band of teaching staff highly motivated to train the students of M.Sc. (Physics). The physics department has very well equipped laboratories with advanced research activities in Nuclear Physics and Material Science. A very conducive environment for physics learning is being established. A large number of seminars, special lectures by eminent scientists and participation in conferences are pursued. M.Sc. Students participating in conferences and presenting contributory research papers is a unique feature of this department.

The physics department aspires to be one of the distinguished centers for excellence in physics learning and research. Department has Research Collaboration with Florida International University, Miami, USA.

•Nuclear Physics Research: This work centers on radiation shielding with special reference to nuclear reactor environment. In such environments, high energy neutron and gamma fields result in radiation streaming through various ducts and coolant tubes. High levels of gamma radiation doses which is hazardous to working personal. It is interesting to note that used fuels in a nuclear reactor is disposed by enclosing the radioactive Uranium fuels in a glass shell surrounded by Lead or other heavy materials. In order to develop a very effective composite shield, we are working on studying the glass-lead and glass-ceramic combination with a suitable adhesive.

•Thin film and coatings: The research on thin films and coatings focuses on development of various novel metal oxide based semiconductors in their thin film form for optoelectronic, gas sensor and thermal barrier coatings applications. Materials like Zinc Oxide, Indium Oxide, etc, are fabricated and their efficiency and capability as coating materials are being worked. Along with this, the effect of dopants on the microstructural and optical properties of these metal oxide films are being investigated. Thin films of zinc oxide, tin dioxide, and indium oxide have been grown by chemical spray pyrolysis and Successive Ion Layer Adsorption and Reaction (SILAR) techniques have been grown. 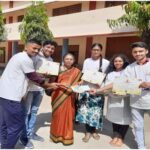