NAAC Accredited With Grade 'A'

2.   Research paper published in the Souvenir of the 26th session of South Indian History Congress

3.    UGC Sponsored Seminar on ‘Cultural Tourism and Life Enrichment”,08-09, March 2007, organized by Department of History and

The Department of Indian History, University of Madras.

by University of Madras, Department of Indian History

by the University of Madras, Department of Indian History and ICHR, New Delhi,

by the Department of History, Maharani’s Arts College for Women, Bangalore.

9.  Adjudication for Re-censure and Collage Competitions at the Jain College Fission Fest Management courses held on 15-02-2008.

Karnataka – worked as Resource  Person on the topics – (1) National Movement (2) Indian Renaissance. It was telecast in all the DSERT centres all over

12. Participated in the symposium organized by Maharani’s College, Women’s Studies Department on 8th March 2007 as part of International Women’s Day.

13. Attended Karnataka History Congress in 2009 and presented the paper “Ethnological element in Karnataka Tourism in the 20th Century”

14. Attended the National Seminar at BMS College on 24 and 25 of October, 2013- and presented the paper “Career Opportunities for

15. Attended the International Conference BoE 2014 – Bounds of Ethics in a Globalized World- January 6-9, 2014- and presented the paper

“An Ethical Approach for Development of Tourism- Need of the Hour” at Christ University in collaboration with Event Partners.

16.  Attended and presented a Paper at National Seminar, Maharanis College- ‘Temple Centric Traditions are reflected in the Inscriptions’ on 28th and 29th of

January, 2014 and worked as Moderator for panel discussion.

17. Presented the Research Paper “An Ethical Approach to Tourism : Need of the Hour” at the International Conference “Bounds of Ethics” Organised by Christ University in January 2017

19. In 2020 Presented the Research Paper”Role of Social Media in Tourism Sector with special reference to karnataka ” at the UGC Sponsered National Seminar on “Impact of Social Media on Commerce” Organized by the Department of Commerce, National College, Jayanagar, Bangalore and Dr. B .R Parineetha was adjudged as “Best Paper Presenter” 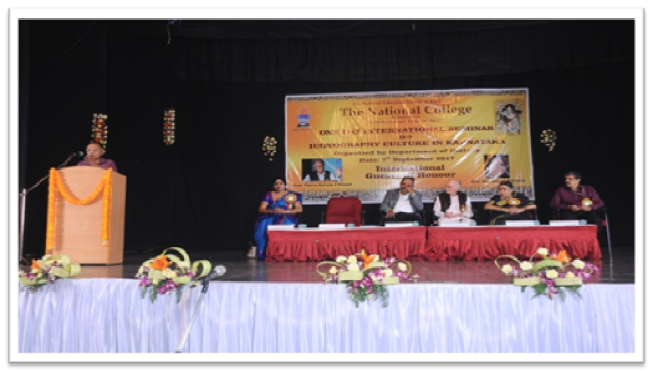 The International Seminar on “Iconography Culture in Karnataka” was organized by the Department of History on 7th September 2017. The Chief Guest, Prof. S.Gurumurthy, formerly Private Secretary to Chief Minister of Karnataka and Governor of Karnataka delivered the Inaugural Address. The Keynote address was delivered by Prof. Pierre Sylvain Filliozat, Professor of Samskrut, Member of Institute of France, Paris. He delivered a lecture on the topic “Mantra to Icon- Sadashiva” and highlighted the features of iconography of Sadashiva depicted in various sculptures in Karnataka based on the description of Sadashiva in the Mantras. The Guests of Honour for the Seminar were Mrs.Vasundhara Filliozat, Art Historian and Epigraphist and Prof. S.N. Nagaraja Reddy, The Hon. Secretary, N.E.S. of Karnataka. The Function was presided over by Dr. A.H. Rama Rao, President, N.E.S. of Karnataka. 16 Research papers were presented by eminent scholars. 89 delegates and 200 students participated in the Seminar. Some of the outstanding Resource Persons were Dr. R.H. Kulkarni, Associate Professor, College of Fine Arts, Chitrakala Parishad, Bangalore, an authority on Chalukyan Art, Dr. Manjiri Bhale Rao, Associate Professor, Tilak Maharaj University, Pune, Dr. Sudha Rani, Associate Professor, Dr.Ambedkar University, Hyderabad and Dr. Smitha Surebankar from S.V.P.College, Belgaum.

" To provide holistic education that contributes to all-round Personality Development "